Isn't it more clear to say “View votes to close” than the current “View close votes”?

First, the word "close" can have a few very distinct meanings, some being:

And, when I first saw on SO/SE "View close votes" I read it as the second, but I couldn't understand what that meant. (me: "Close? Close to what?") To those of us who don't (or didn't) know that there was a voting process to close out a question, it's easily misunderstood.

Don't you think the phrase should be rewritten to say, "View votes to close" instead of "View close votes" because it would be more clearly understood?

Here is a screen shot of the listing of Privileges. It's the primary place where the phrase is shown. 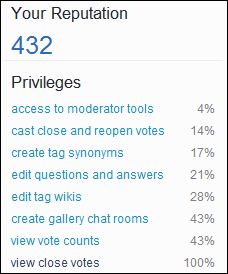 This site is for discussion about Webmasters Stack Exchange. You must have an account there to participate.

6
Vote to close: Belongs on …
4
Is the visited link color too close to the default text color for posts and comments?
8
Do we need a new close reason for legal questions?
4
Bringing more users to Meta
4
Why is the gradient on top not fading to the background color?
3
close question - My two questions
3
Should we add two more close or flag options?