Should Webmasters allow 3 votes to close a question rather than 5?

I feel like it is currently too hard for non-moderators to close and re-open questions on Webmasters. According to 2021: a year in moderation in the last year our moderators closed 989 questions while non-moderator users only successfully voted to close 2 questions. According to A Theory of Moderation "The ideal moderator does as little as possible" and reserves their big-hammer single-vote close actions for questions that are blatantly off-topic.

I propose that we reduce the number of close votes from regular users that it takes to close a question from five to three. If we wanted to do this, a community manager told me that they could make the change for us. Stack Overflow already made this change two years ago. They found that "lower close/reopen vote thresholds, better enables individuals to trigger each critical action: close, reopen, edit." I'd hope that if we made the same change here it would better empower our community and take much of the burden for keeping our site on-topic off the shoulders of the moderators.

Should we follow suit with Stack Overflow and reduce the close, re-open, and edit thresholds from five to three?

As of now this site setting has been changed.

I went through the stats over the past couple of years and I can see that the moderators are doing the bulk of the closures - in fact, they've been involved in all but three over the last two years.

This chart shows the number of closures and reopens over time based on who was involved in the closure. The purple line is all closures and you can see there's only a handful of spots where the yellow "moderator" line can be seen peeking out behind it. 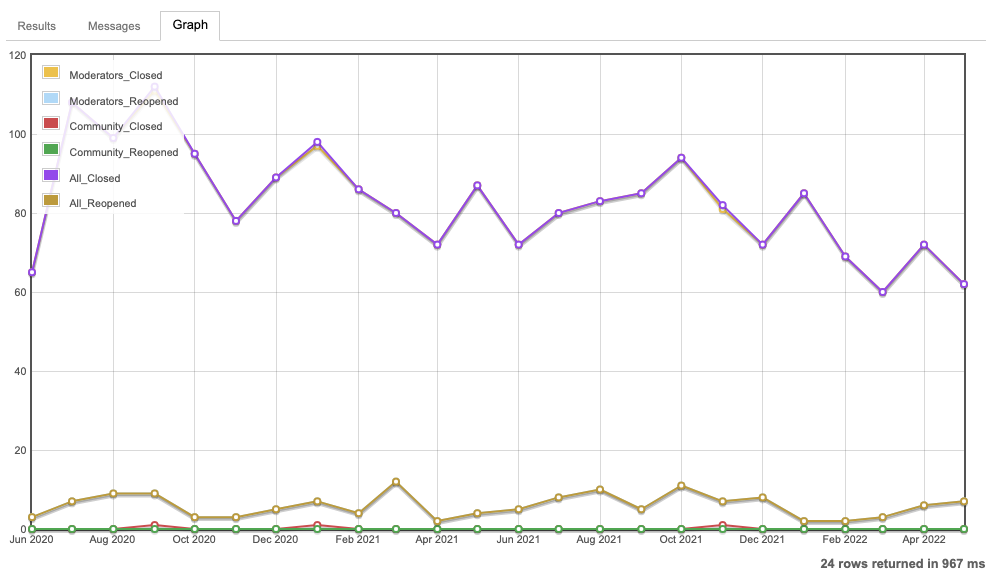 That said, I want to caution y'all - this isn't going to necessarily reduce the load on the moderators... because the mods are casting the bulk of their close votes as the first vote to close, not the third or later. 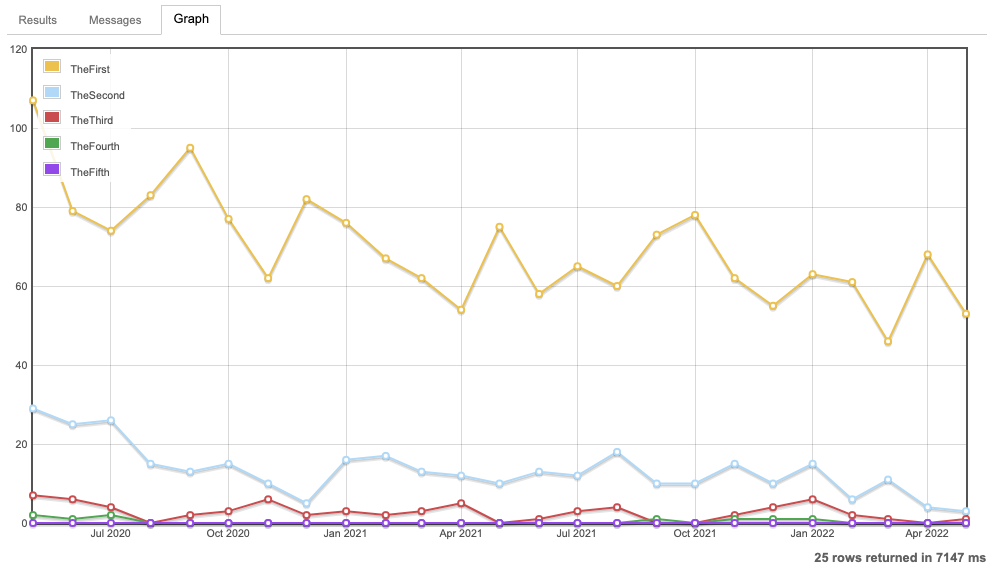 The graph above shows which vote mods are casting - and it's usually the first vote. It's completely possible that the reason for this is that the likelihood of getting to five was really low, so the mods were taking the lead - the hope is that, with this lower target, mods may feel like they can step back a bit and let the community fill in the voting to get posts closed.

That said, it's up to you all to make that decision. Please let me know if you have any questions!

I think the numbers speak for themselves. Currently, if a moderator doesn't close a question it's likely not going to be closed.

I agree that we should lower the vote to close threshold to three votes.

Not the answer you're looking for? Browse other questions tagged discussion status-completed vote-to-close reopen-queue .

5
Let's shape this site with Vote to Close!
14
Moderator Nominations
6
Getting users to vote
4
What can I do to re-open this closed as duplicate question, because it is not a duplicate
4
Should Pro Webmasters unpin the accepted answer from the top of the list of answers?