The name "Google AdWords" has been deprecated for several years. You do still hear google-adwords or just plain adwords every so often tho - mostly out of habit. Those could become synonyms. 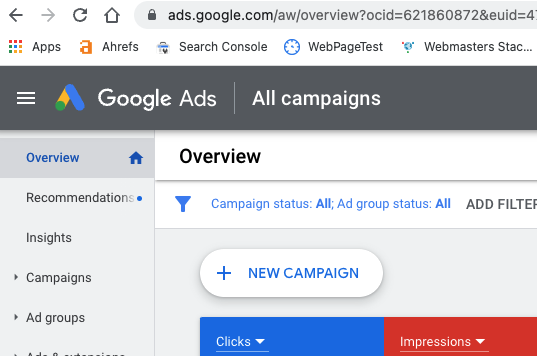 This reminds me of when Google changed Google Webmaster Tools to Google Search Console back in 2015...

Using that as a precedence, we could compare Google Ads with Google AdWords using Google Trends again, which indicates here that Google Ads is the much more dominant of the two. Currently we don't have a google-ads tag yet, but the tag wiki for google-adwords already states: "Now referred to as "Google Ads". Therefore we really can't compare the tag usage like we did previously.

I think it's good if our site keeps up-to-date with terminology though so we don't appear outdated, and in this case, the name change occurred over three years ago.

Therefore, I think we should create a google-ads tag, and make google-adwords (and its synonym adwords) a synonym of the canonical google-ads tag. When a user types in google-adwords, the google-ads tag will then automatically be populated for them to select. The tag wiki for google-ads should also note that it was previously referred to as "Google AdWords".

To differentiate google-ads from google-adsense, we'll also edit the two tag wikis to note that Google AdSense is for publishers and the Google Ads program is for advertisers, along with other relevant distinctions.

With the consensus of the community, I'll make the above changes and update this answer with details for the tag wikis too.

(As per the discussion in the comments under the question)

It appears we're not gaining much of a consensus, other than the original tag (google-adwords) should be renamed to better match Google's current naming. I suggest we use the name of Google's product as is (google-ads) for now since it doesn't exist as a tag yet, and if there's any apparent confusion later, we can always revisit this discussion and rename it to something else then. With more mods than in-coming questions on some days, it shouldn't be hard to monitor that.

A google-ads tag and tag wiki were created, which states (primarily from Wikipedia):

(Formerly known as "Google AdWords", and different from "Google AdSense") Google Ads is an online advertising platform offered by Google, where advertisers bid to display brief advertisements, service offerings, product listings, or videos to web users. It can place ads both in the results of search engines like Google Search, and on non-search websites, mobile apps, and videos. Services are offered under a pay-per-click (PPC) pricing model.

The google-adsense tag wiki was also updated to:

(Different from "Google Ads") Google AdSense is a program run by Google through which website publishers in the Google Network of content sites serve text, images, video, or interactive media advertisements that are targeted to the site content and audience.

Lastly, the adwords-value-track tag was also made a synonym of a newly created google-ads-valuetrack tag, and a tag wiki for that was created.

I'm pleased to see that this question has stimulated so much discussion. Stephen mentioned something that got me thinking:

If somebody says "Google Ads" to me I assume they are talking about Adsense.

That being said, I notice that we do not have tags for either PPC or Display Ads (which are very different things) - I consider these to be of the same type as "SEO", which we do have a tag for.

I think Dan makes a great point about precedent, and I'm personally in favor if his original proposal both because I think that google-ads makes logical sense AND follows historical precedent (yet, all ideas have been great tho). That said, I'd like to take a second to build on this.

I think there is a good argument to be made for the addition of ppc or pay-per-click and display-advertising or display ads to fill the aforementioned gap. That covers both forms broadly. The question then becomes, how should a user add specificity?

Could it be the case that simply adding the "Google" tag along side solve the problem? I ask this because Bing and other big tech also have ads platforms (e.g. Pinterest, Wayfair, Etsy). This approach would future proof the taxonomy for additional types, but it opens up the possibility to confusion; usage would have to be communicated very well. I think it's too error prone, and generally makes less sense.

Alternatively, the addition of these top level tags might not change things - to me they're not mutually exclusive. We could go with Dan's proposal to add google-ads yet also add ppc and display ads.

The tagging of a question about Google Ads would look like this:

And the tagging of a question about AdSense would look like this:

This would control for future additions as well. google-adwords naturally still becomes synonymous with the new canonical - there's also the (unused) adwords tag, which seems like a clear candidate for deletion regardless.

I agree that google-adwords should be retired, but replacing it by google-ads would be a mistake. If somebody says "Google Ads" to me I assume they are talking about Adsense. This new name is very ambiguous. I worry that if we rename the tag to google-ads will be added to Adsense questions. We have more than 100 questions tagged "adsense" that use the phrase "google ads".

I like Dan's suggestion of google-ads-for-advertisers for the new tag.

I don't think it would be necessary to rename the Adsense tag to google-adsense-for-publishers at the same time.

Not the answer you're looking for? Browse other questions tagged discussion tags .

0
What's the deal with this "untagged" tag?
1
Is there any way to re-write this question so it doesn't get closed as not constructive?
8
On topic question closed for being off topic?
2
Should old questions with no more interaction from the OP, be flagged and closed on the basis that we can not know if the answer helped?
20
Feeling the frustration
11
Moderator Back If you will have me :)