Which of the tags [canonical], [rel-canonical] and [canonical-url] is the canonical one?

Of the three, only canonical-url has any usage guidance or tag wiki. The other two (canonical and rel-canonical) are bare. Glancing over the questions in each tag, there does not appear to be any meaningful distinction in usage. Should these tags be merged?

canonical and canonical-url are probably similar enough to merge on this site. There could be canonical things other than URLs, but I'd expect that 99.9% of the usage of canonical refers to URLs. Because of that, I would prefer canonical-url to be the canonical of the two.

EDIT: The proposed merge of "canonical" and "canonical-url" has now been completed: 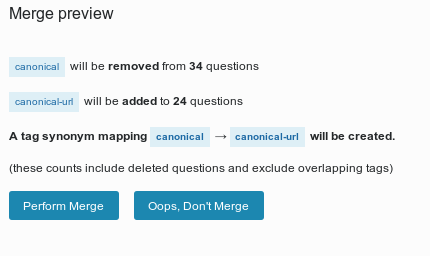 Not the answer you're looking for? Browse other questions tagged discussion status-completed tag-synonyms retagging .

3
Dealing with tag overlap for 'ranking'
6
Are you going on marking community wiki each SEO question?
5
the [domains] tag versus [domain-names]
3
There's a bunch of wierd tags, can they be cleaned up?
1
Should [url-format] be merged with [url] tag?
5
Blog vs Blogging tags
6
Microdata, Schema.org and Microformats shouldn’t be synonyms
1
The error and error-code tag should be merged
8
Deceptive links in answers
5
Adding [xml-sitemap] as synonym for [sitemap]