Numbered lists are broken after the second list item?

I've just noticed this whilst attempting to fix the formatting of the numbered list in this question, but I can't!?

UPDATE: Sorry, I thought this problem was more general at first, however, it only seems to be affecting that one question/answer!? Answering or editing other questions on Pro Webmasters (or other sites) appears to be OK.

The third list item in a numbered is appearing as a sub list, ie. indented. In the preview window this gets the number 1 (as in a regular sub list). However, in the submitted text, this correctly gets the next number from the parent list, ie. 3 - however, it is no longer seen as a list item, unless you've included a line gap between list items, in which case it is still indented like a sub list. (?!)

Bizarrely I can't seem to mark up the section as code (or a quotation), the problem still occurs and breaks the code block.

Here's a screenshot of the edit window and preview. The third list item is being rendered as an ordered sub list. 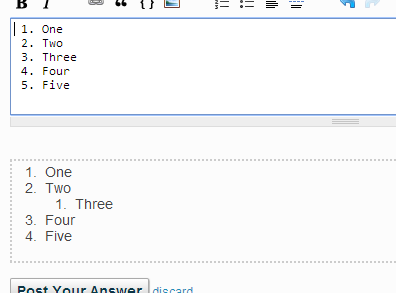 However, if you'd entered a line gap between list items in the editor, then the final rendering appears different again (screenshot). Actually, the rendered HTML is not so different to above. The third list item has become part of the second (although a literal 3. is written) and the indentation is the result of 2 spaces prefixed to the text.

I've tried this on StackOverflow and WebApps and it appears OK.

Just to wrap this question up... there was a "funny" unicode character in the question source that I was unable to see/edit which was breaking the markdown output. (I had also inadvertently copied this same text into another answer which also copied the "funny" character.) On the Pro Webmasters website this did not show at all for me in the editor and I could not delete it. Using Google Chrome on Windows 7.

However, if I copied the text into an external editor (such as Notepad++), the "funny" character was visible as a square block:

Analysing this character in a hex editor revealed the 3 bytes E2 80 A8 which is unicode code point U+2028 (LINE SEPARATOR).

Not the answer you're looking for? Browse other questions tagged .

3
"Start A Bounty" link still shows up even after an answer is accepted
2
Site stats broken?
2
"Visit Meta" doesn't list new questions
3
Why are my comments modified and my user -contacting with "@user:" are removed?
5
After page 7 of unanswered questions, there are questions with answers?
6
How was an answer posted after the question was closed?